The Segment में The Best Car

The Best Car In The Segment

Suzuki Alto is a great car built by Suzuki. The selling points is the low pricing. The fuel economy is great. Maruti Alto is the Indian-built version of the fifth generation Alto, manufactured by Maruti Suzuki. It was launched in the Indian market on 27 September 2000. Maruti Suzuki India Limited introduced the new Alto on 23 April 2019, which has been India's best-selling car for 15 consecutive years. The new Alto now comes with BS4 compliant engine, nearly a year before the regulation being mandated. With a cumulative sales of over 3.7 million since launch in 2000, Alto has been a symbol of pride for Indian car users. Nearly 58% of Alto customers have chosen it as their first car purchase. 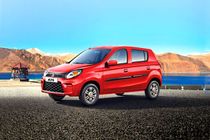