Upward mobility. It's not an uncommon or unworthy quest in life and it's something that Volvo has worked tirelessly to achieve over the past few years. Not all that long ago, the Swedish brand was viewed very much as a cut-price alternative to the premium German triumvirate of Audi, BMW, and Mercedes-Benz. Well, these days, Volvo isn't simply knocking on the door of that exclusive club it's partying hard inside. Of course, when you're no longer significantly cheaper than your rivals, there's no excuse for not being as good and that's the challenge faced by the XC60. Based on the same platform that underpins Volvo's flagship XC90, the XC60 is almost as wide but it's shorter and several thousand pounds cheaper. It also has five seats rather than seven. The original XC60 (2008-2016) was a big hit and even picked up our SUV of the Year award. However, this latest model is up against much tougher competition than its predecessor, the best of which includes the Audi Q5, Land Rover Discovery Sport and, more recently, the DS 7 Crossbar 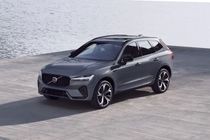