I am using it with 2 years it gives good mileage and the three modes sports-city-eco are very good it gives superb speed at sport mode and in eco mode it gives good milage and The Tata Zest compact sedan is the first of the new vehicles from the Pune-based automaker. It was first shown just ahead of the Auto Expo, and was launched in the middle of 2014 in five diesel and four petrol variants. It features a very similar design to that of the hatchback but includes a noticeable but quite decent looking boot. It makes use of the same engine, underpinnings, interior design as well as feature list from the hatchback. The variant nomenclature is new to this family of vehicles and runs across both petrol and diesel engine options- XE, XM, XMS, XT and XMA , the last of which is specific to the diesel range and has been mated to the five-speed AMT. Exterior The Tata Zest follows the same principle as that of the Bolt hatchback in terms of design and overall appearance. The side profile remains the same up to the C-Pillar but thanks to the boot has a different appearance. At the back, the lights have a similar design to that of the hatchback with a stubby boot lid. All variants are being offered with alloy wheels, body coloured bumpers and chrome inserts on the outside, the final being added for premium appeal. Above the base XE variant, projector head lamps, chrome weather strips on windows and OVRMs with LED indicators are standard. The top-spec XT variant also gets chrome garnish on the fog lamps, LED daytime running lights and LED guide rings on the head lamps. Interior The interiors are exactly the same as the hatchback including the overall layout, features and upholstery. The list includes Harman touch screen music system, gauges behind the steering wheel and two-tone upholstery across all variants. The feature list is exhaustive with the top-spec XT (petrol and diesel) getting a touch screen infotainment system developed by Harman for Tata, climate control, power windows, electrically adjustable OVRMs, rear parking sensors, dual-tone interiors, door-coordinated cabin lights and day night adjustable rear-view mirror. Engine and gearbox In terms of engines, Tata will offer this compact sedan with the 1.2-litre Revotron engine which is petrol powered and produces 84bhp/140Nm. The diesel engine on the other hand is the 1.3-litre Quadrajet diesel. Transmission options include the five-speed manual as well as an AMT which is a first for Tata especially in this segment. 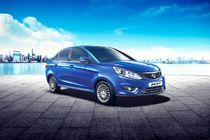