Currently, I am the owner of Skoda Rapid and it?s been nearly 6 months driving the vehicle. I am clocking on an average 1500 km per month. I am extremely satisfied with the vehicle and till date, no major problem has occurred. The car requires only periodic maintenance that too is not so expensive. One thing company has to change is the number of service centers which has to be increased in the country. Skoda Rapid has always been the steady performer for the company since its launch in 2011. So, to keep the vehicle in the race, the company decided to give it a new face and prepare for another stint. In the latest model, the vehicle has received changes on both the outside as well as inside. With these new additions, Skoda has given Rapid a sharper, bolder looks that shows its European traits.
In terms of exteriors, most of the emphasis has been given to the front, the face looks sharper and sleeker than before.The new radiator grille is surrounded by chrome accents while the headlamps deliver aggressive looks. Side profile remains unchanged while the rear part gets subtle chrome strip on the bonnet and smoked effect on its tail lamp lens, rear bumper is mildly redesigned. Interiors get black and beige colour theme while the dashboard is tweaked to go well with the edgy exteriors. The biggest change inside is the new 6.5-inch infotainment unit that connects your smartphone through MirrorLink feature, steering wheel also looks good. Other features include cooled glovebox, cruise control, climate control, auto-dimming rearview mirror and remote operated power windows. Skoda Rapid is powered by new 1.5L TDI diesel engine and with turbocharger onboard, the power has been increased from to 110PS. The car is competitively priced but the after sales service has to be improved in order to make its position strong in the country. Rest, it?s a fun-to-drive car with superior built quality. 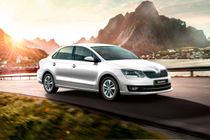