The total experience so far.

The total experience so far.

Hector, as its name indicates bully's, its rivals because of its daring looks, starting from its front the massive LED headlights and the DRL's positioning gives it the aggressiveness, coming to its side profile it looks glorious but just the 17 inch alloy wheels somewhere take the thunder away, then coming to the back of the car, it looks attractive as well. If tacking about the features it is fully loaded with features such as massive 10 inch touch screen through which every function of car is controlled, its an internet-connected car, also the book closes automatically by pressing just 1 button, reverse parking camera is also included with sensors, the additional touch to the car is its massive panoramic sunroof which lets the interior to be brighter and feels more luxurious. Taking of space then Hector has humongous space which includes, the legroom, the headroom, shoulder room, etc. All feel large even the boot of hector is big enough. Coming to the engine on paper as seen it gives 179 bhp but due to some reasons, it doesn't feel that way. Also, the steering is not like an SUV kind and the all-touch functionality which is provided is somewhere inconvenient while driving physical buttons are handier than that. 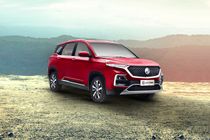