The Hyundai Elite i20 looks as sharp today as it did when it was launched. Over the past few years, Hyundai?s given it a few updates to make sure it didn't fall behind any of its competitors, primarily the Maruti Suzuki Baleno, Honda Jazz, VW Polo, and even the new Maruti Suzuki Swift. There haven't have been any major revisions under the bonnet. So you still get the same 1.2-litre petrol (83PS/115Nm) and 1.4-litre diesel (90PS/220Nm) engines, paired with 5-speed and 6-speed manual transmissions respectively. However, Hyundai claims the fuel efficiency of the engines has been improved by up to 9 percent. As you?d expect of a facelift, the most significant changes are cosmetic. Upfront, the Elite i20 sports the new Hyundai family grille, which essentially gives the old grille a shot of botox. That aside, the front bumper looks sharper and gets smaller front fog lamp enclosures. A cool touch here is that they include slim air curtains to reduce drag. Overall it is the best hatchback in the budget. 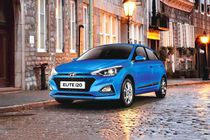