Owner's review 1100Km: I bought the Grand i10 petrol top model this Diwali Oct-2016 and have driven ~1000 KM so far, mostly city driving in Jaipur. It runs on city roads.   Flawlessly, light steering, smooth gear shift and the best thing is the rear AC vents but there are a few things that I miss in Grand i10 from driver's point of view.   (1) Average fuel economy on MID, (2) Instant Fuel Economy on MID, (3) Distance to Empty on MID, (4) Dead Pedal for resting left leg (even Santro had this but not available in Grand i10 or i20,surprising for me), (5) Reverse camera (sensors are available in Asta Option), (6) Touch screen AVN (AV unit available in Anniversary edition but not in top variant Asta option), (7) EBD (Electronic brakeforce distribution)...   All must have features. At least, Hyundai should have AVN or AV and rear parking camera along with some other accessories at the dealership so that interested customers can get it done at dealership itself. I also miss some additional storage spaces like KUV100 has (under the seat and under floor storage very helpful and hidden storages). I also like the integrated music system, Bluetooth connectivity feature and steering mounted control. It works flawlessly and the Bluetooth feature is a boon when you get a call while driving. Also, The features like keyless entry along with start-stop button add premiums to the car. In addition to this Hyundai has to do some work in the suspension area, it does its job most of the times well but still, an improvement is required! Front view for the driver isn't very good. You have to take a call while parking whether there is enough gap or not as the driver seat doesn't move up to that level so that front space can be seen properly. The new Grand i10 is offered with two engine options - one petrol and one diesel (1.1L U2). The petrol engine is the same Kappa 1.2 dual VTVT engine which is already doing a good job in some of the other cars in the Hyundai lineup. The 1,197cc engine develops a peak power of 83 bhp at 6,000 rpm and peak torque of 114Nm at 4,000 rpm in the Grand i10. The engine is smooth and silent and does a great job most of the time. Rest is really good e.g. interior quality, fit and finish, style, power, sporty alloy wheels, rear washer and wiper, 1 litre bottle space in all door pockets, foldable rear seat, front fog lamps, two 12v power sockets, enough space in front to keep knick-knacks, cooled glove box, low maintenance, Hyundai's superior service network. Fuel efficiency in city ~14-15Kmpl also good enough. I am expecting it to improve after first the service. Music System: Loads of options to play music, USB-Drive, Aux, Bluetooth, Integrated 1 GB storage (863 MB usable) but no CD/DVD player. Sound quality is fair enough. Steering mounted controls for music system controls to change track, increase/decrease volume and mute. Overall it is a very nice family hatchback with tonnes of features at this price point a big thumbs up for all future buyers who are looking for a feature loaded small hatchback. 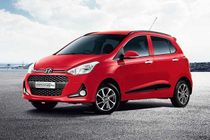 i want to buy sports model