Maruti Celerio uses the same K-series 1.0-litre petrol engine with the typical three-cylinder in-line setup, which we have also seen on the Maruti WagonR. As it is a three-cylinder engine it has the inherit thrum of 3-pot engine and isn't quite as silent as the Beat’s four-cylinder engine. Celerio performs well when it comes to drivability, the engine smoothens as the revs rise, and however the engine get vocal and jerky when it nears the 4000rpm redline. The performance of the car is satisfactory as it has a 1.0-litre engine; you get ample torque even on lower RPMs, though these are not as good as the punchy mid-ranges. NVH level are also lower as Maruti guys worked hard on this and kept the NVH level as low as possible. This engine loves to be revved and this gives Celerio a sporty character and the super smooth AMT(Automated Manual Transmission) addes to the functionality. The light body weight translates into an impressive power-to-weight ratio and you never feel there’s a shortage of power. The 5-speed manual gearbox is smooth as well but the automatic gets superior edge over it. On the whole, Maruti Celerio is a star performer, which makes it a good urban drive whereas its sporty character is a plus here. Apart from this Celerio is recently launched in diesel engine option that is a 793cc inline 3 cylinder motor. The all new engine produces a power of 47 Bhp and a peak torque of 125 Nm. We will update on the performance of the diesel as soon as our experts test the all new Celerio Diesel. Check out the expert review video of Celerio. 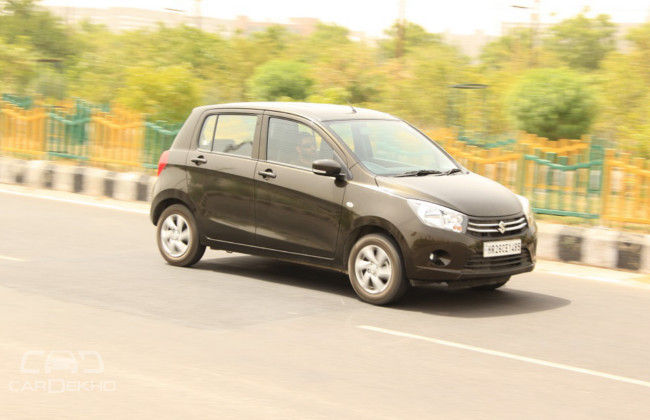