I purchased a Honda WR-V in the month of July 2018. The vehicle is running fine with occasional problems that the service center said they were unable to rectify. One of the MOST MAJOR ISSUE was with the navigation card. The vehicle was sent for a periodic service at the dealership. The navigation card was working fine till such time the vehicle reached the dealership and when it came back from the service, the navigation card starting showing an error. The same was pointed out to the dealership and they said they would look into the issue. Now, after repeated communications and emails in this regard, they have finally declared that they cannot do anything about the navigation card and it would be replaced ON COST basis even after the vehicle is UNDER WARRANTY and even after the issue was pointed out immediately after the periodic service. Honda is just not ready to rectify the issue and are blaming it squarely on the customer.

I think best way to deal with this is to file a consumer case. 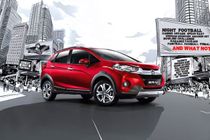