Look and Style The looks of the GTR are somewhat different when compared to those of other cars. You might think of it as a botch-job full of squiggles, curves and lines. But the truth lies in the fact that every crease from the front channels air to the rear spoiler(even the crease on the door mirror!). But I think it looks rather brilliant. Not like a Ferrari or a Lambo, but beautiful in it's own unique way. It has presence. Comfort The suspension of the GTR is said to be tuned by Lotus, which car-lovers can vouch for with no doubts on their mind at all. The GTR is known to be one of the fatest cornering cars created with grip that no other car can offer. It also settles down when you you stop throwing the car round corners. It is said to be quite comfortable. It even has 4 seats so you can take your chldren out to experience the terror. Pickup If you meet a person with a V8 under his hood and you tell that you have a 3.8 liter V6 under your GTR's hood, he will laugh his head off at you. But you needn't worry about that. Because that V6 of yours can give any V8 a run for it's money. It produces roughly 490-500 hp with loads and loads of torque to push your way throught the rev-band all the way upto the redline. It is very fast-revving and can go from 0-100 in under 4 seconds. And for a 4-seater saloon car, that's downright brilliant. Mileage Now this being a very powerful car, you wouldn't expect it to be very fuel-efficient. And fuel-efficiency is not one of the reasons you would go buy this car for. But that said, it is quite economical for the enormous power and performance it delivers.(The actual figures are not with me) Best Features One of the best features on the GTR is the central console's touchscreen. It not only plays movies and works as sat-nav and your multimedia interface but also shows you Lateral G, Acceleration fuel consumption and various other graphs.. For about a crore, thats a toy you would want in your car.(You show-off!) Needs to improve Well, it's har to say what it could improve on, it's good at nearly everything. But maybe fuel-efficiency can be better(an SLS AMG with nearly 70 more horsepower than this is far more fuel efficient) Overall Experience Drving magnificence,precision and fun. Nothing left to say. 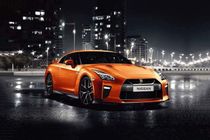