The perfect entry into Luxury

The perfect entry into Luxury

Is it crazy to spend over 25 lacks on a small hatch back Well, consider this. Your family could be safer in this, than a huge imposing SUV, that you could buy for the same money. What if its also luxurious and more fun to drive than similarly priced vehicles. Sound good right But there is a problem. If you had been driving a sedan for a few years, chances are, you would have thought about a luxury car at some point. And for me (and possibly others), only three German brands come to mind. So, when I think of buying an entry level luxury, Volvo was not particularly on my list. That was until recently. I had an opportunity to drive a Volvo V40 on a week-long trip. Within few miles of driving it was clear to me this was not the Volvo I imagined. This was fun. A couple weeks earlier, on a business trip to Europe, I had the opportunity to drive an A4. So, I had a good yard stick to compare. Yes, the A4 is a class above and almost double the price. But a good yardstick none the less. If anything, the V40 was far more engaging and fun. The V40 has low ground clearance. While it could possibly handle a bit of country side, it can?t handle the monster speed breakers in some cities. So, if you live in Bangalore, avoid it like the plague. Now that is out of the way, let?s look at the good stuff. Inside and outside, attention to detail is meticulous. Just look at the rimless rear view mirror. The Scandinavians make great and elegant interiors. It makes some German interior look industrious. However, the small TFT screen is disappointing and there are too many buttons. Who uses number pad keys? It has a thumping great sound system. Acceleration is rapid. But not linear. Lets say you put your foot down. Nothing seems to happen for about two second and then everything happens in the next second. If you want a lesson in how forced combustion engines work, this is a great example. The turbo kick-in will wake up the Sebastian Vettel in you. By the way, this 5-cylinder must be the best sounding diesel engine I have heard. Want more power? No problem. You can take it to your authorized Volvo dealer and say so. Unlike any other car in India, Volvo can perform an official engine mod for you, called the polestar optimization. Now that the good stuffs are out of the way, lets look at the great stuff. The V40 has the best brakes I have every tried in any car. (3-series, A4, Civic included). It gives so much confidence when you push the car. It has the best front row seats of any car I have ever driven too. Don?t know why. But it is genuinely good. I guess, Volvo sees both as Safety aspects. Naturally, they have to be the best at it. This Volvo is so much fun, I almost forgot to talk about safety. The 5-star safety rating doesn?t begin to explain how safe this car is. This car has airbags even outside. Yes, if you crash into a pedestrian an airbag would pop out of the front to help save the pedestrian. Wait, it gets better. It wont let you crash into a pedestrian or anything in the first place (at city speeds). The V40 comes standard with front facing radar and camera that will automatically brake the car, if it senses an impending collision. The verdict It works. I drove through bumper to bumper traffic, narrow village streets and highways and it doesnt intrude normal driving. It auto braked twice during my entire trip. Both the time, I felt it, it made the safer judgement. That to me is the greatest value of this car. If you are a first time luxury car owner, you are probably going to be overwhelmed with the thought of how much you would lose if you crash, dent or bump. In the Volvo, you will feel invincible. Whats more, it feels every bit built to last. If you think VWs are built like a tank, this in on whole another level. If the Volvo forums are true, this would be far cheaper than the Germans to service and repair.

Couldnt agree more with the reviewer... I just bought a Volvo V40 D3.. I have a 5 year old and I cannot feel more confident to drive him in Europe...(I live in Switzerland) where official speed limits in highways are 120-150 kms /hr , in the event of a crash any other cars, less chances that one would survive.. the ISOFIX car seat for kids is also great with curtain air bags for back passengers!

very nicely written and meticulously too. 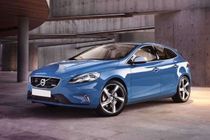