With the increase in petrol prices, when the car owners are opting to choose a diesel car, the leading car making company Volkswagen is up with its new Volkswagen Jetta Petrol variant. I am not sure about the inside stories but, there can be a lot of reasons why the company has chosen for a petrol model instead of a new diesel sedan. As it is obvious that Volkswagen Jetta was available in diesel variant only lately but the petrol one is going to be launched soon. I came across a couple of test drive reviews of the yet to be launched car, which reveal some exciting features of the new sedan. I believe that the very important part that we will be bestowed upon will be mileage of the sedan. Where the other petrol sedans put a shame on the mileage area, VW Jetta 1.4 TSi delivers a proud one. During my short test drive, I managed to get a mileage of around 14kmpl. It may not be that amazing but is fine as compared to the other petrol sedans. The next big reason, in my opinion, for the company to launch the petrol variant, can be the inclusion of Diesel Car tax on all diesel cars very soon. However, exteriors, basic appearance and various other measurements of the petrol variant are same as of its diesel variant. The length, width and height of the sedan are 4644mm, 1122mm and 889mm respectively. If we talk about the makeover of the car, it is tremendously styled. The body paint gives a royal look and the car in some angles gives a striking resemblance of Audi A4. The quality of body colour is far superior compared to other sedans. The initial impressions of the car to me are truly impressive. The car seems to be vibration free and the engine sound is too quiet at decent speeds. Let me tell you, Volkswagen Jetta 1.4 TSI is powered by a strong 1390cc turbocharged, direct-injection engine delivers a peak power of 120bhp. The car has some awesome statistics in pickup too. It will manage to reach 100kms from rest in just 10.5 seconds. The engine noise can be heard post 4000rpm. Folks, what I realized in the car is that the petrol variant misses some significant features like powered sears and climate control, but it comes attached with six airbags for extra safety. The sedan is valuable for its price but on some comparisons, it seems to be a little high. The Laura in comparison, despite being older and having less advanced technologies, offers better value largely because of its 1.8 TSI engine which is smoother to drive than the Jetta’s 1.4-litre unit. 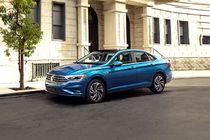 Hats off to VW for being visionary in predicting the petrol market trend. As a whole the Jetta scores only on the mileage and it's rear styling. I'm waiting for the new Laura petrol till I make the last call. I'd also liked a dsg on the Jetta / Laura at the price they are at, at least the high end.