Tata is going crazy with its vehicles for past so many years. Recently, my friend purchased the Tiago JTP, the performance version of Tiago jointly made by Tata and partner Jayem. I was one of the lucky one to take it for a long drive of the golden triangle Jaipur-Delhi-Agra this month. The looks and interiors are stunning and really value for money. But my real experience was with the driving which I would like to share with you guys. The engine is the most interesting aspect of this car. The Tiago has replaced the old 1.2L naturally aspirated petrol engine with the 1.2L turbocharged one shared from Nexon SUV. This has changed the dynamics to a far extent as the car is now capable of producing 114PS and 150Nm of torque, from the earlier 85PS. The engine makes noise a bit on start with the exhaust gurgling to give something promising ahead. When you push the car hard it will make various kinds of noises including that of induction and exhaust. The engine is coupled with 5-speed manual gearbox which has also been tuned for better performance. Now as you put the car in the first gear you will notice that the clutch is pretty light. Throttling up just pushes ahead this car, waving off the road dust. Though being a performance car, the acceleration isn't fast but more than enough to keep you planted on your seat. The second gear just slots in with a pensive mechanical thud but comes along with a lot of power. And by the time you place the third gear, the speedometer would have already touched the 100kmph. That means the car can dash from 0-100kmph in less than 10 seconds of time which is stunning, to say the least. During the entire journey, we never felt a dearth of power as the delivery is linear. And despite its overexcited and enthusiastic nature, the car does not compromise in day to day shuttling. With light clutch and tall third gear with a lot of torque available at tap around 2000rpm, you have ample grunt available at all the times no matter whether you are pottering in cities or cruising on highways. In my opinion, if you have a decent budget of around Rs. 8 lakh and want a performance packed the car, I would say don't miss this opportunity as car buying is a onetime decision. But what you get is the value for money, especially when we compare it to other performance hatchbacks such as Baleno. In short, Tata Tiago JTP is a car for enthusiasts from the enthusiasts. 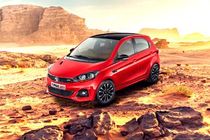