You Will Love To Afford

Ford Freestyle is a compact car loaded with everything you desire in a small car. However, some of the improvements can make it better. First inside:- 1) The windscreen and the display screen are in such an angle that displays get faded. 2) The front seats are comfortable but rear seats require more width/depth to be comfortable. 3) The Air conditioning although effective but nowhere near the Ford AC as witnessed in other ford cars. 4) The light switch is placed on the right in a very awkward place. 5) *Battery safety and monitoring system is an issue* for which the car is being recalled for change/ correction. Second Out Side:- 6) DRL is not provided although the bumper has provision for fixing it. DRL could have improved the looks 7) The rear view camera could have placed higher for better rear view. 8) The proximity sensor could have been more calibrated to give better feedback. 9) The Ford Figo three-cylinder engine should have been replaced with more powerful version. 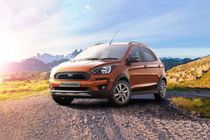