When Aston Martin revealed the DB11 earlier this year, it was met by industry-wide celebration. It is, fundamentally, a beautiful car, and unquestionably one of the most attractive vehicles launched in 2016. Replacing the well-loved DB9, this is the first in Aston Martins second-century plan, which will see five new vehicles released over next four years, including the much-anticipated DBX SUV. But thats for another time. When the DB11 arrives, Im taken aback by its size, and its beauty. DB is the backbone of Aston Martin, says Miles Nurnberger, Aston Martins Creative Director of Exterior Design, And the DB11 wears the most gentlemanly face. Its the English gent: it wears its nose slightly high, it has a moustache, it is physically the English gentleman. And I applaud this notion. Its lines flow seamlessly, and the back-end is highly reminiscent of the elusive One 77. But what Im really here to find out is how it performs as a Grand Tourer, and what better way than to drive to the Isle of Man and put it around the iconic TT course. The Isle of Man is a miniscule island off the west coast of England with a motoring heritage so deeply rooted on its roads that it almost rivals Aston Martins. Since 1907, the Isle of Man TT has been the motorcycle road race, with many claiming it the road-racing capital of the world. Most of the islands roads are also blessed with no speed limits, so the opportunity to take the DB11 around the course at full-pelt is an exciting one. Needless to say, the DB11 runs impeccably. Sadly, the naturally aspirated 6L V12 found in the DB9 GT has been replaced with a 5.2L twin-turbocharged V12. But, pumping out an impressive 600bhp, the new engine makes the DB11 a 200mph car, and thats not to be sniffed at. Its also remarkably efficient for a supercar, and I average 27mpg on the drive to the ferry port near Lancaster. Two hundred and sixty miles on three-quarters of a tank is, unquestionably, an impressive feat, and one that does its grand-tourer pedigree justice. 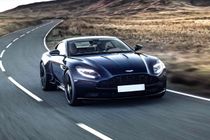