The Mahindra Verito has been around for quite a while. Of course, it began life as the Logan. But since Renault isn't involved anymore, Mahindra is working on Indianising the Logan, starting with a new name, Verito.   This is the second iteration on the evolving Verito. In the last round, Mahindra had done little more than change the badges and toss in some minor tweaks. This time however, it's done a bit more homework. This facelift is far more comprehensive. Starting with a generous helping of chrome slapped on to the front And no, the Verito hasn't been driven into the front of the new Xylo. But the grille does seem to be based on the Xylo's. Along with this, you get redesigned headlamps and front bumper. We're not complaining, the overall effect is good. The rear too has new lights and a new bumper. But the biggest change is the moving of the license plate from the bumper to the bootlid. It helps break up the mass and gives the Verito a more contemporary look. Apart from this, there are new alloy wheels and roof rails. We think roof rails look good only on hatchbacks and station wagons, though. But the best part of this facelift is the things that haven't changed. Mahindra knew it had a product with solid underpinnings, so it didn't go overboard by fixing things that weren't broken. So you get the same extremely fuel-efficient 1.5-litre DCi motor and that suspension that pretty much soaks up everything. Okay, so the motor only puts out 65bhp and 160Nm of torque These figures may seem paltry on paper, but in the real world, the Verito is light on its feet, especially in the city. The motor pulls cleanly, and past 1500rpm, throttle responses are pretty good. You won't feel the need for horses in traffic, but out on the highway with a full load, you need to play with the gearbox to extract performance. Zero-100kph comes up in 14.9seconds and it is rated for a top speed of 160kph, which is just about respectable. But you can't escape the fact that the competition sports better figures, especially in the engine department. But the Verito hits back with shattering fuel economy figures. It'll return 13.8kpl in the city and 18.5kpl out on the highway. For a car this big, that's are pretty good. Suspension sees virtually no change, so the Verito has no problems with bad roads. Most bumps are filtered out with ease and high-speed stability is pretty good too. The steering provides decent feedback, but feels a touch light as the speeds rise. It turns in well and grip levels are good. Road manners are much like what you'd expect of a European saloon. And we didn't find much reason to complain about the Verito's dynamics.   On the inside, you can see Mahindra's been busy. The new colour schemes look a lot better than the earlier dull beige. Ergonomics are better too, with the power window switches finding their rightful place in the doorpads. You get a new centre console and a stereo system borrowed from the Xylo.   Plastic quality also sees a slight improvement. Older strengths like the large, comfortable cabin remain. These little changes make the Verito much easier to live with. On our top-end D6 variant, you get a decent equipment list, with driver airbag, ABS, stereo, remote locking, electric mirror, apart from the regulars. You need to shell out Rs 7.10lakh (ex-showroom, Mumbai) for the top-end D6. Prices for the base petrol start at a value-for-money Rs 5.17lakh (ex-showroom, Mumbai). Compared to the DZire ZDi, the Verito D6 is cheaper by Rs 50,000.   The Tata Manza Aura, the Verito's natural rival, also retails for Rs 7.10 lakh. For that money, the Manza gets a more powerful engine and roomy interiors. The Verito was very capable to begin with and with the latest round of changes, it is that much better. But in light of the competition, especially from the Manza, the Verito needs to up its game further. 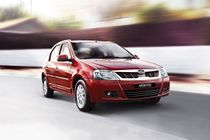