Quanto was the first attempt in the compact SUV space from the homegrown automaker Mahindra & Mahindra. Years after the launch and the success of the Quanto in the sub-4 meter SUV space, the company decided to give a new lease of life to the aging Quanto. It is now known as with the new nomenclature NuvoSport. The 7-seater SUV is considerably a better-looking version against the predecessor but still appears quite unusual if parked alongside Vitara Brezza, EcoSport, and own sibling TUV300. The insides are pretty much the same as Quanto but there are improvements in the form of new Kenwood touchscreen infotainment system, AC controls and switchgear shared from TUV300 and spacious cabin. The engine is also the improved version of Mahindra 1.5L mHawk diesel motor that produces over 100bhp and 240Nm of peak torque. The car also gets new automatic gearbox which certainly uplifts its practicality. Overall, NuvoSport looks better, offer more features and with the car getting dual airbags and ABS as standard fitment, the worthy of its being a strong contender in the class is nothing to question about. 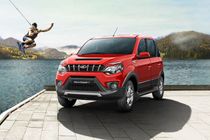