Best Part In Mahindra KUV 100 nxt - Gear Lever Placement: The gear lever on the KUV100 has been uniquely placed on the dashboard - Flexi 6 Seater layout: Mahindra has nattily placed a middle seat in between the two front seats that can also be used as a massive armrest for the driver and the front passenger - The KUV100 comes with ABS anti-lock braking as standard across all variants, while airbags are offered as an option from the base variant onwards. 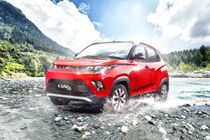