Fiat Linea The Best Performing Engine In Its Category

Fiat Linea is a sedan that has been around for a long time in the Indian market. And most of the time it remained on the sidelines mainly to due to less popularity of the brand. Fiat India first launched the Linea sedan in the country in the year 2009, at that time Fiat Linea was the first car to come up with a turbocharged petrol engine. Its remarkable performance attracted the buyers across the country. Fiat launched the facelifted version of Linea in the year 2014, the vehicle received updates both on the inside and outside but specifications remain the same. However, in the year 2016, the carmaker gave a major update in the form of Linea 125 S which I also purchased given the performance reviews of the car. The revised version of Fiat Linea gets the new bumper which is more bling with the dash of chrome, fog lamp has also been updated while the radiator grille gets a square pattern. The rear profile has the same contemporary look with large chrome strip. Interior is significantly spacious and gives the feel of modernity. Driver?s seat is height adjustable while more premium dual tone dashboard enhances the ambiance. Other features included in the list are AC vents, cruise control, and climate control. Top-spec variants now come with long demanded touchscreen infotainment system with navigation and Bluetooth connectivity. Performance wise, the 1.4L turbocharged T-Jet petrol mill is the talking point of this update. The engine now produces 123bhp as compared to 114bhp in the earlier version and 210Nm of torque, mated to 5-speed manual gearbox. The power delivery is extremely linear and in a continuous fashion. The engine is silent and offers thrill at the same time, the best you will find in its category of vehicles. Overall new Linea embodies the best Italian design with gorgeous exteriors and stylish ergonomic interiors. Its solid built quality and performance makes it a car that is worth buying. However, the weak after-sales service network is a cause for concern, so it should be bear in mind. 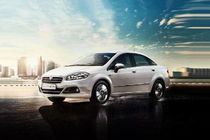