सर्वश्रेष्ठ in all class

Best in all class

The name only suggests luxuriousness in it. It's the best car rather it's the best mechanical piece of work one can see. The longest sports utility vehicle of 5150 mm nearly, It produces a whooping 600 bhp of power which gives you an ample amount of torque whenever we require it. Inside it it feels like a perfect dose of power and luxury. From 1970 the RANGE ROVER owned the luxury SUV segment but the Bentley Bentayga became the game changer, This car gives all the things one can assume or desire of. Although it comes in only one variant that costs 3.85 crore ex-showroom Delhi, but that is nothing as compared to Range Rover. This has a 6.0 litre engine which is powered by diesel fuel. Since it costs a lot and everyone knows that it's for a much richer people so it's foolishness to talk about mileage but then also it's 6.0 litre engine gives a sufficient amount of mileage. It has a touchscreen speedometer and a large touch screen for navigation. It also has most perfect transmission which gives it a top speed of 301 kmph in just 4.1 seconds. The SUV which such large dimensions and with such a luxury and the ample amount of torque which gives you a pleasant smile whenever you put your foot down can only be done by a true Bentley only. 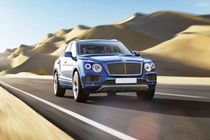