Hyundai has increased the number of variants on the Eon offering the driver's side airbag as an optional extra. It is now available on all variants except the base D-Lite trim level. Each of these optional variants has been priced Rs 10,000 over their non-airbag counterparts. Previously, the South Korean automaker had only offered the driver's side airbag with the top-of-the-line Sportz variant. They are being offered with both the 800cc three-cylinder engine as well as the 1.0-litre three cylinder mill. However, the 1.0-litre engine is only available in the Magna, Magna+ and Magna+ (o) variants. The move to introduce the airbags by Hyundai appears to have come in response to Maruti Suzuki offering an optional driver's side airbag for all variants of the Alto 800 expect for the base model. It's larger sibling, the Alto K10 has the driver's side airbag as a standard feature on the VXi (o) variant while on the Renault Kwid it is an optional extra on the top-spec RXT variant. 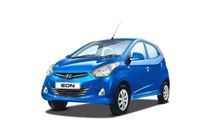