Renault entered the MPV segment in 2015 with the launch of the Lodgy. Based on the same platform as the Duster, the Lodgy is a seven-seater MPV that has been designed to cater to family car buyers and fleet-owners alike. Apart from rivaling the likes of the Maruti Suzuki Ertiga and Honda Mobilio, it is a considerably more affordable people-mover than the Toyota Innova Crysta. Does it have what it takes to find a place in your garage? Let’s find out. 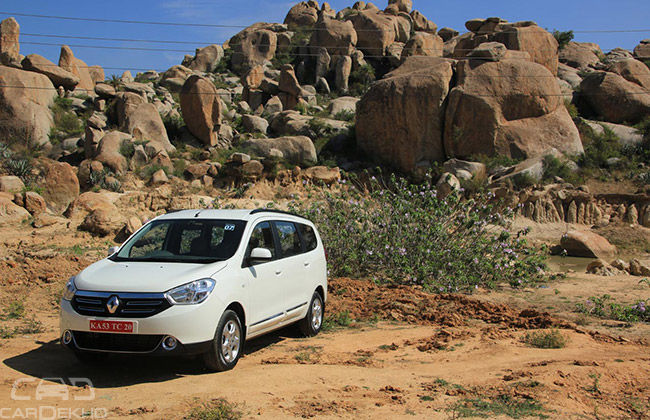 The Lodgy is a well-made, practical and efficient MPV. It shares traits like the robust build quality and fantastic ride quality with the Duster, and gets a diesel engine which is quite efficient in real world conditions.

"It’s also a great seven-seater for those cannot stretch their budget to get the expensive Innova Crysta."

The only drawbacks are its average interior quality and awkward styling, which reduce its appeal to private car owners, but it’s a great buy for fleet-owners.

On first impressions, the Renault Lodgy doesn’t come across as your typical Indian people mover. Indeed, it looks very van-like and that’s not a styling package that’s clicked with Indian buyers in the past. However, the Lodgy does look very European. The styling is simple but not drab and while it may look rather small in images, it’s quite large in person.

In fact, the side profile is where you get the Lodgy’s sense of size as it measures nearly 4.5 metres in length, and more than that (4522mm) in the Stepway guise. Also, while the boxy design may suggest that this is a van, the Lodgy doesn’t use sliding rear doors.

Opt for the Stepway variant and the Lodgy does look a lot snazzier thanks to the custom detailing. Highlights include some chrome studs on the front grille, faux skid plates, some silver accents on the sides and Stepway insignia.

15-inch wheels come as standard and as expected, they do look a little small when riding below a vehicle as big as the Lodgy. But opt for the 110PS Lodgy Stepway RxZ and you get a more size-appropriate set of 16-inch wheels wrapped in 195/55 section tyres.

The rear end does look rather plain with the spaceship-shaped tail lights making it easy to identify the Lodgy from the rear. From a design standpoint, the Renault Lodgy is purely functional. It doesn’t get projector headlamps or LED exterior lighting to add a touch of the wow factor, and that may be a turn off for some buyers.

The to-the-point styling of the exterior is an indication of what you can expect inside the Lodgy. The first word that comes to mind is familiar. Renault has employed a lot of the Duster’s parts inside the cabin.

So the steering wheel, the medianav infotainment system, aircon controls and vents are shared. While there’s no problem in their integration, the overall quality feels very industrial. A lot of hard and squeaky plastics have been used throughout the cabin. Yes, you can have leather seats and leather on the gear lever and steering wheel along with a few chrome touches, but at no point will you deem any of this premium.

However, if a functional cabin is what Renault was going for, they’ve done the job right. Available as a 7- or 8-seater, the Renault Lodgy has a fairly well-planned cabin, for the most part. In fact, a major talking point of this MPV is the last row.

Even when compared to much larger and more expensive MPVs like the Toyota Innova Crysta, it’s the Renault Lodgy that delivers the most accommodating third row experience. Apart from offering the most headroom, it’s also generous in terms of shoulder and knee room.

Even getting in and out of the third row is easy as both middle row seats tumble forward. The second row seats aren’t too large either, giving the rearmost occupants a good view ahead.

However, the last row benefits in the Lodgy have come by compromising comfort in the second row. For one, in the seven seater variant, i.e. the Captain Seats variant, the smaller seats aren’t comfortable for passengers of a large frame and they don’t slide! Even the shoulder and knee room is among the lowest in the segment, making you wonder if the compromise is worth it. After all, the third row is less likely to be used than the second and is generally a space kept to accommodate the kids. Had the middle row been slidable, this wouldn’t have been a sticking point.

This is, however, a spacious and airy cabin to be in. The glass area is generous and you don’t feel hemmed in, even in the front row. But the front row could use some updates to make life easier. The steering, for one, is only tilt-adjustable.

Reach adjustment would’ve made finding the right driving position so much easier, especially since the driver’s seat height isn’t adjustable in the traditional sense. You only have two settings - all the way up or all the way down, which is a very big miss at this price point.

Practicality is well-thought of in the cabin. There’s ample space to store knick-knacks and bottles in the dashboard integrated shelf, glovebox and door pockets. The second row also gets airline-style trays in the 110PS RxZ variant. Good as the Lodgy’s third row is, the luggage space could’ve been a little better.

On paper, the Lodgy does have more boot space than the Mahindra Marazzo (207-litres vs 190-litres) but the boot isn’t too wide. Additionally, the third row reclines at an angle that cuts into the usable boot space. But when storage is a must, the rear rows do tumble forward.

What’s more, the third row seat is actually removable, opening up 759-litres of space with four to five passengers on board. Fold the second row away and there’s a colossal 1,86 litres of cargo space! Move your house and your neighbours, or skip booking hotels on road trips and make the Lodgy your bed.

It is fair to call the Lodgy a 7/8-seater on a budget. As such, the tech pack in here isn’t very rich but does cover the basics. You get a 7.0-inch MediaNAV touchscreen infotainment system paired with a four-speaker sound system for entertainment.

While there are rear AC vents in the second and third row, the air conditioning is manual. That’s right, no auto AC! Fortunately, you do get cruise control - a useful feature in something like this, as there’s one thing the Lodgy can do very well...

..road trips! Much like the Renault Duster, the Lodgy’s diesel engine is quite adept at cruising duties. Available in 85PS and 110PS tunes, this engine loves to munch miles and we tested out the more powerful iteration.

Get onto the highway and this engine is at its happiest. Shift up to sixth gear and it’ll quietly manage long distance drives. It also manages high speed overtakes without much planning. As long as you keep the engine above 2000rpm, light throttle inputs are all you need to overtake high speed traffic. This easy going nature also rewards your pocket as the Lodgy managed a tested 16.69kmpl on the highway, with average speeds of 68-70kmph. It’s also a strong performer off the line, managing the 0-100kmph sprint in just 12.31 seconds.

However, should those highway trips involve driving in the ghats, it’s best to stick to second or third gear, particularly in the 110PS Lodgy. As we experience at high speeds, the Lodgy isn’t lacking for power but it does suffer from turbo-lag. Simply put, if you’re driving through slow traffic, you will find yourself shuffling between the lower gears quite often. In fact, on inclines, you may have to stick to 1st gear especially if the Lodgy’s being run with a full passenger load.

In city traffic too, you find that low speed overtakes do take some planning, simply because the engine does feel dull before the turbo kicks in. In all likelihood, you will find yourself shuffling between first to third gears, which can take a toll on efficiency. It’s not the most efficient pick in the city managing about 10.46kmpl, which is about the same as the Tata Hexa automatic!

Like most Renaults, the Lodgy is a master at handling the rough stuff. This MPV stays absolutely flat even over high-speed bumps and no matter what row you’re seated in, the Lodgy stays sure-footed and stable. While driving at low speeds, potholes and bumps in the city are brushed off effortlessly and you can keep accelerating where most other cars would have to slow down.

This does have a benefit in terms of handling as well, as the Lodgy feels very planted through corners and doesn’t experience much body roll. This makes a major difference in hilly areas, where car sickness is a major challenge. But it is, at the end of the day, an MPV. People carriers aren’t meant to be enthusiast pleasers, so the steering, while light, is calibrated to make daily driving easy, nothing more.

The Lodgy’s safety pack includes dual front airbags, ABS with EBD, rear parking sensors, a rear camera and front fog lamps. Unfortunately, there is no six airbag variant available and while ABS is standard, dual front airbags are restricted to the top-spec RxZ grade only.

Don't miss out on the festive offers this Month

Please tell us your city

It will help us serve you better content and best deals